Klayman: George Clooney Likely Has No Interest in Girls Other Than for Appearance Purposes to Create a "Macho Image" Like Rock Hudson: So What Does He Know?
Order "It Takes a Revolution: Forget the Scandal Industry!" at BarnesandNoble.com 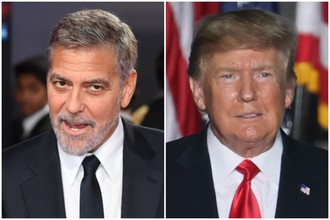 The politically outspoken actor and director shared his cutting take on Trump as he defended current President Joe Biden amid falling poll numbers.

Appearing on BBC's The Andrew Marr Show on Sunday, Clooney argued that Trump's legacy has left Biden's administration with an uphill struggle in fixing America's issues.