Klayman: Hanging With Children Is on the Cackling Witch's Intellectual Level!
Order "It Takes a Revolution: Forget the Scandal Industry!" at BarnesandNoble.com 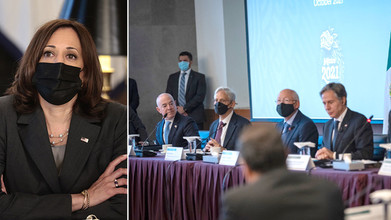 Kamala Harris skips US-Mexico border-security meeting, goes to New Jersey instead
By Brie Stimson
Fox News
October 9, 2021
Several top members of the Biden administration were in Mexico City on Friday for a meeting with Mexican officials regarding security along the U.S.-Mexico border. But Vice President Kamala Harris wasn't among them.

Harris, whom President Biden appointed in March to manage the U.S. response to the migrant crisis along the border, went to New Jersey instead.