Klayman: There Is No Political Messiah Other Than Jesus and the Father and Their Flock "We the People!" The Age of Politicians Must End!
Order "It Takes a Revolution: Forget the Scandal Industry!" at BarnesandNoble.com 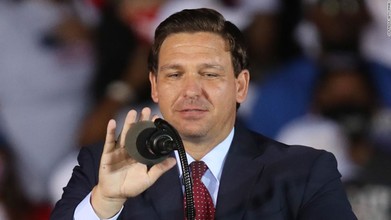 Analysis: Donald Trump sends a very clear message to Ron DeSantis: Stay out of 2024!
By Analysis by Chris Cillizza, CNN Editor-at-large
CNN
October 4, 2021
(CNN)Donald Trump may be waiting to announce his (seemingly inevitable) run for his old office in 2024 but he's already sending a warning shot at a potential rival for the nomination.

Asked about the possibility of facing Florida Republican Gov. Ron DeSantis in 2024, Trump was hugely dismissive.

"If I faced him, I'd beat him like I would beat everyone else," Trump told Yahoo Finance late last week. "I think most people would drop out, I think he would drop out."