Klayman: Trump Will Not Run for President Again Because If He Does Rabid Leftist Dem Prosecutors Will Indict Him and Don Jr. and Eric Trump!
Order "It Takes a Revolution: Forget the Scandal Industry!" at BarnesandNoble.com 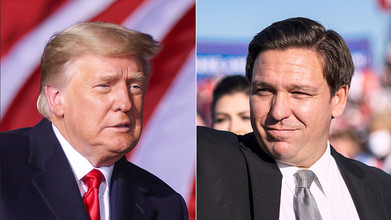 Trump says he knows what would happen if he faces DeSantis in 2024 presidential primary
By Paul Steinhauser
Fox News
October 3, 2021
Less than a week before he returns to the state that kicks off the race for the White House, former President Trump says in a new interview that if he runs again for president, most other Republicans would "drop out."

But if Florida Gov. Ron DeSantis, whose standing among conservatives has skyrocketed over the past year and a half, also makes a bid for the 2024 GOP nomination, Trump emphasizes, "I'd beat him."

The former president made his comments in excerpts released Sunday from an interview with Yahoo Finance that's scheduled to be published on Monday.