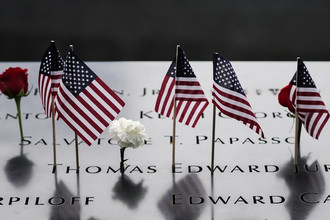 By Asher Anderson, Executive Assistant to Larry Klayman
Freedom Watch, Inc.
September 11, 2021
It is coming to that time of year. The long wave of summer heat has begun to shift elsewhere, and the feeling of fall is upon us. It is September. This year marks the 20th anniversary of the horrific terrorist attacks on the Twin Towers. That day was one of the last days that America's enemies would ever feel accomplished. But that is changing with Biden and Harris behind the wheel.

I, as well as most people in the world, will never forget that day. My dad came storming into my room, waking up my brother and me and ordered us to the living room. There I was 6 years old, witnessing only the beginning of the evil that this world can hold. "This wasn't a game. We are under attack," my dad said with fear and anger. My parents, both retired U.S. Marines, were dressed for combat. As I watched a TV firing off images and clips of smoke, flames, and death, my parents were gathering their gear and weapons, along with food and anything else to prepare for a war on our front lawn.

That very day, as evil and heartbreaking as it was, revealed to me the true greatness of America and what it means to be a Patriot. People all over this nation came together and stood by one another. It took that day to happen to get us to put aside our differences and look at one another as Americans and disregard irrelevant pronoun stickers or if you were vaccinated or wore a mask. Old Glory never stood so strong.

Every time I saw a flag, the red and the blue were more vibrant than ever. It still didn't dawn on me at the time where we were headed. One morning, my friend Anthony came to class in tears. He came to me and asked if my parents were home. "Yes," I replied. He had this look in his eyes that mimicked despair. Without telling me, I realized the man he had brought to show and tell, dressed as a Marine, was no longer home. His Father was on a C-17 bound for war. At that moment, I realized America wasn't just a country, but she was alive with the strength and will to fight back.

I remember being so proud that we were fighting back. It made me think of the times I went onto Camp Pendleton with my mother and watched the aircraft fly and to know that those very same aircraft were on their way to obliterate the enemies. This made me proud to be an American even during this time of distress and terror. I wish I could feel that feeling of immunity to terror and resilience to our enemies again.

Nowadays, every year when we come to this day, I'm more heedful than usual. I can't help but feel like we are going to be threatened or attacked, this year more than ever. The next time it happens, it may not be some lousy terrorists, we should prepare for that. Biden and Harris are really setting us up for it, even more than Obama. The open question is whether this is intentional, or just plain stupidity. I think the former.

With the recent withdrawal of Afghanistan, the terrorists, most of them being disciples of the 9/11 terrorists, have access to more advanced weaponry and vehicles. Iran and other Islamic nations that host these terrorist groups have been pumping money into these terrorist groups to use as proxies to carry out their dirty deeds. Afghanistan gives China, who has threatened nuclear attacks against the United States, an opportunity for a stronger economy with access to lithium, which is an essential mineral essential for rechargeable batteries and other items. With the money that China and other nations will generate from Afghanistan over lithium and other resources, we can expect that now, under the control of the Taliban, Afghanistan will turn into a very well-funded and even bigger international threat to the west.

And, let us not forget the 13 servicemen that were recently murdered during the Kabul Airport attack. The world was waiting for our forceful response, but little to nothing happened. Instead, we showed the world that it's okay to kill our military and American's citizens. Biden and Harris, along with most of the leftist tyrants want to take away our guns. What good are our guns, necessary for self-defense against the violence in our streets and neighborhoods, going to do in any event against the bomb-strapped terrorists that they are letting in from the Mexican Border and elsewhere? And, if the bombs don't kill you, surely the Covid-19 vaccines and Biden's new mandates will — forcing deadly poison down our throats!

Americans, let us take a moment. Have lunch with your family, watch the news, maybe make a phone call to a veteran. Let us take this time to remember 9/11, not for the horrors, but for the evidence of unity. Remember how it felt, remember what had to be done. With Biden and Harris, there is a likelihood that in the not too distant future we won't remember 9/11 in this vein anymore! Under their "leadership," the nation is no longer ours and the world now sees the United States as a toothless tiger, gasping for air as it dies what is now a predictable near death unless We the People rise up to reclaim our heritage before it is too late.