Klayman: Watch The "Gorilla Tactics" of Soon to Be Removed Gov. Gavin Newsom and His Rabid and Racist Anti-White Leftist Allies!
Order "It Takes a Revolution: Forget the Scandal Industry!" at BarnesandNoble.com 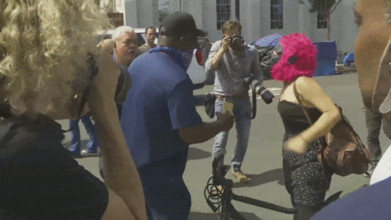 Larry Elder egged by woman in gorilla mask in 'racist' attack in California
By Emma Colton
Fox News
September 9, 2021
Critics are lambasting the woman who was seen on camera wearing a gorilla mask while throwing an egg at California gubernatorial candidate Larry Elder as he toured a homeless encampment in Los Angeles.

"A blatant racist wearing a gorilla mask attacked @larryelder these people are completely unhinged," former Republican candidate for the Virginia House of Delegates, Jeffrey A. Dove Jr., tweeted in response to video of the incident.

Elder was on a tour of a homeless encampment in Venice Beach on Wednesday when the woman dressed in black and wearing a gorilla mask launched an egg at the conservative radio show host. The egg did not hit Elder.