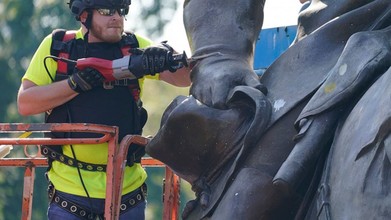 Statue of Gen. Robert E. Lee comes down in Virginia capital
ABC News
September 8, 2021
RICHMOND, Va. -- One of the nation's largest Confederate monuments came down Wednesday as workers removed a figure of Gen. Robert E. Lee that towered over Virginia's capital city for more than a century and became a target of protesters seeking to abolish symbols of racial injustice.

A crowd of onlookers erupted in cheers and song as the massive figure was lowered to the ground. A construction worker who strapped harnesses around Lee and his horse lifted his arms in the air and counted, "Three, two, one!" to jubilant shouts from hundreds of people. A work crew then began cutting it into pieces.