'Qanon Shaman' Pleads Guilty to Felony in US Capitol Riot
Order "It Takes a Revolution: Forget the Scandal Industry!" at BarnesandNoble.com 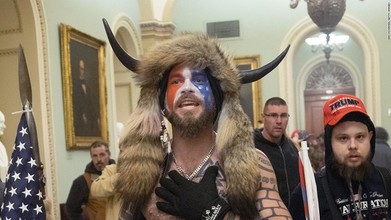 By Marshall Cohen
CNN
September 3, 2021
(CNN)The so-called "QAnon Shaman" who stormed the US Capitol in a horned bearskin outfit pleaded guilty Friday to a felony for obstructing the Electoral College proceedings on January 6.

The defendant, Jacob Chansley of Arizona, is a well-known figure in the QAnon movement. He went viral after the January 6 attack because of the bizarre outfit he wore while rummaging through the Capitol. He made his way to the Senate dais that was hastily vacated earlier by Vice President Mike Pence -- someone Chansley falsely claimed was a "child-trafficking traitor."