Klayman: Fox News Darling Sen. Cotton Has Big Mouth but Little Action! More Than Letters to Biden Is Required!
Order "It Takes a Revolution: Forget the Scandal Industry!" at BarnesandNoble.com 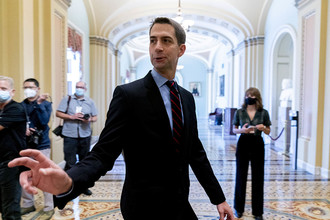 Led by Sen. Tom Cotton (R-Ark.), a group of 26 Republicans wrote Biden on Thursday morning requesting information by next week about who remains in Afghanistan after the frenzied evacuation effort at the end of August.

"Our immediate priority is the safety and well-being of American citizens, permanent residents, and allies who were left behind in Afghanistan. We are also concerned by reports that ineligible individuals, including Afghans with ties to terrorist organizations or serious, violent criminals, were evacuated alongside innocent refugee families," the senators write in the letter, a copy of which was obtained by POLITICO ahead of its release.