Klayman: Stupid Is as Stupid Does! More American Deaths Caused by Biden-Harris Imminent!
Order "It Takes a Revolution: Forget the Scandal Industry!" at BarnesandNoble.com 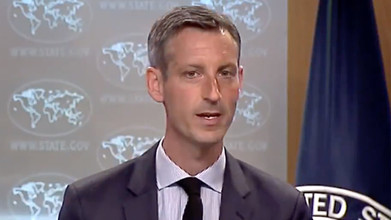 State Department contradicts Biden's remarks that there may be a 'kill list' provided to Taliban
By Andrew Miller
Fox News
August 28, 2021
State Department spokesperson Ned Price seemingly contradicted President Biden's acknowledgment that the United States may have provided the Taliban with a list of names of Americans and allies in order to usher them to the airport.

"The idea that we are providing names or personally identifiable information to the Taliban in a way that exposes anyone to additional risk, that is simply wrong, simply wrong," Price said in response to a question about reports that the United States provided what some have called a "kill list" to the Taliban.

On Thursday, Fox News confirmed a Politico report that U.S. officials in Kabul gave the Taliban a list of American citizens, green card holders, and Afghan allies in an effort to grant them entry to the airport, which resulted in outrage from military officials behind the scenes.