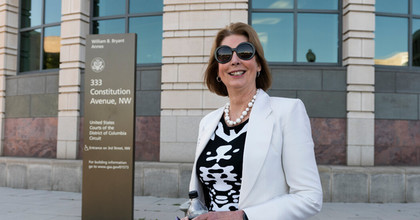 Judge Orders Sanctions Against Pro-Trump Lawyers Over Election Lawsuit
By Alan Feuer
New York Times
August 26, 2021
A federal judge in Michigan on Wednesday night ordered sanctions to be levied against nine pro-Trump lawyers, including Sidney Powell and L. Lin Wood, ruling that a lawsuit laden with conspiracy theories that they filed last year challenging the validity of the presidential election was "a historic and profound abuse of the judicial process."

In her decision, Judge Linda V. Parker of the Federal District Court in Detroit ordered the lawyers to be referred to the local legal authorities in their home states for possible suspension or disbarment.

Declaring that the lawsuit should never have been filed, Judge Parker wrote in her 110-page order that it was "one thing to take on the charge of vindicating rights associated with an allegedly fraudulent election," but another to deceive "a federal court and the American people into believing that rights were infringed."