Timothy Matlack, Scribe of the Declaration of Independence - Journal of the American Revolution
Order "It Takes a Revolution: Forget the Scandal Industry!" at BarnesandNoble.com 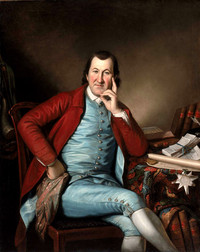 Journal of the American Revolution
August 25, 2021
The scribe of the Declaration of Independence—and perhaps the first man to read it in public—was born on March 28, 1736 in Haddonfield, New Jersey. His family moved to Philadelphia eight years later. At the age of thirteen, Timothy Matlack began an apprenticeship under a prosperous Quaker merchant named John Reynell. Looking forward to a bright future, Matlack enthusiastically signed his contract with characteristic looping flourishes. But then disaster struck his family. His father, Timothy Sr., was a brewer who fell into debt, and the court ordered the seizure of his brewery and household goods. A last-minute agreement allowed the continued use of the property but with a new man in charge: Timothy's half-brother, Reuben Haines. Timothy's father drank himself to death soon thereafter and his younger brothers were admitted to a charity school as "poor scholars." After completing the term of his apprenticeship in 1758, Timothy Matlack married Ellen Yarnall, the daughter of a Quaker minister. Matlack became such a devout Quaker that some people considered him a candidate for the ministry. Timothy and Ellen had four children, the youngest of whom would be killed in a battle at sea during the Revolution. In 1759, Benjamin Franklin, as a member of the Pennsylvania Assembly, hired Matlack to transcribe onto parchment a massive petition to the King-in-Council regarding Indian affairs.[1] In 1760, Matlack opened a mercantile (selling cloths and hardware).