Klayman: Rabidly Leftist LA Times On "Jihad" to Destroy Larry Elder: This Rag Loathes Blacks Who Are Conservative-Libertarian as It Also Hates Conservative Jews!
Order "It Takes a Revolution: Forget the Scandal Industry!" at BarnesandNoble.com 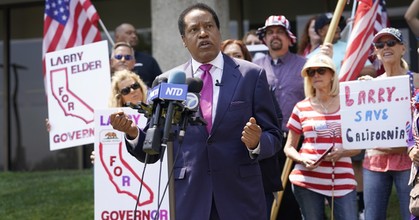 State officials open investigation into whether Larry Elder failed to disclose income sources
Los Angeles Times
August 23, 2021
Elder, like all public office candidates, was required to file a statement of economic interests that discloses some aspects of his personal finances, including stocks, gifts, real estate that he owns and sources of income. The document is supposed to show the public whether a candidate for office would have conflicts of interest in his or her decisions.

Elder's initial filing was only two pages long and only showed income from Laurence A. Elder and Associates Inc. A Times article earlier this month first reported that Elder likely failed to properly disclose his finances because he appeared to own the company, meaning he was also required to report ownership in the business as well as income sources to the company above certain amounts.