Klayman: More Lies and Evil From Baby Murdering Dems: Abortion Does Not Hinge on Cal. Recall Election!
Order "It Takes a Revolution: Forget the Scandal Industry!" at BarnesandNoble.com 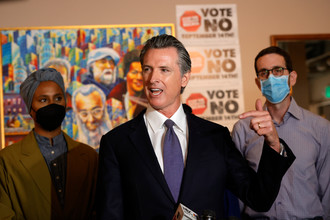 Democrats spotlight abortion in bid to save Newsom
By Alice Miranda Ollstein, Victoria Colliver
POLITICO
August 23, 2021
OAKLAND — Democratic activists working to save Gov. Gavin Newsom from being thrown out of office by California voters next month are seizing on an issue better known for energizing voters on the right: abortion access.

Fearful of widespread voter apathy, Democrats and their allies are hammering the message that a GOP governor could veto abortion-rights laws, cut funding for clinics and appoint anti-abortion agency officials, judges and senators in a state that's long been at the forefront of making it accessible to terminate a pregnancy.

Abortion rights groups like Planned Parenthood and NARAL, as well as the newly formed Women Against the Recall, are phone banking, knocking on doors, posting digital ads and social media messages and holding events with Newsom and other lawmakers as ballots are mailed to voters over the next few weeks ahead of the Sept. 14 recall election.