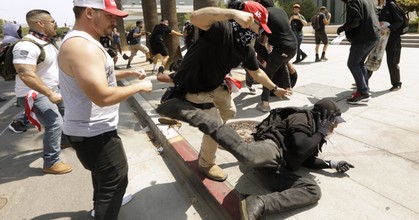 Violence at anti-vaccine protest brings new criticism of LAPD tactics, claims of bias
Los Angeles Times
August 22, 2021
The anti-vaccination demonstrators, Proud Boys and black-clad counter-protesters bobbed around in the street outside Los Angeles police headquarters on Saturday afternoon as if it were a boxing ring, talking trash and raising their fists to fight.

Within seconds a brawl erupted, with people pulling out weapons and throwing punches. By the time LAPD officers in riot gear separated the two sides, several people had been injured and two stabbed — an anti-vaccination activist who suffered a lacerated heart and punctured lung, and a counter-protester whose protective gear likely shielded him from more serious wounds, witnesses say.