Klayman: Biden, Milley & Austin: The 3 Stooges or Just Morons With Blood on Their Hands!?
Order "It Takes a Revolution: Forget the Scandal Industry!" at BarnesandNoble.com 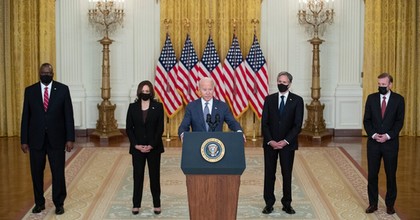 As Biden Faces a Political Crisis, His Party Looks On in Alarm
By Lisa Lerer, Reid J. Epstein and Annie Karni
New York Times
August 22, 2021
With President Biden facing a political crisis that has shaken his standing in his party, Democrats across the country are increasingly worried about their ability to maintain power in Washington, as his administration struggles to defend its chaotic withdrawal from Afghanistan and stanch a resurgent pandemic that appeared to be waning only weeks ago.

While Americans watched devastating scenes of mayhem at the Kabul airport and ascendant Taliban forces last week, the steady drumbeat of bipartisan criticism left many Democrats frustrated and dismayed at a White House they viewed as having fumbled the end of the country's longest war on multiple fronts.