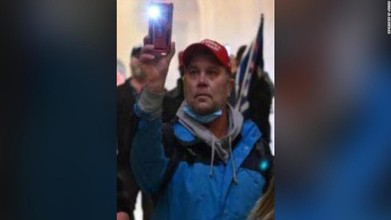 US Capitol rioter sentencing delayed after online sleuths uncover new footage of alleged police assault
By Marshall Cohen and Hannah Rabinowitz
CNN
August 19, 2021
(CNN)The sentencing for one of the January 6 US Capitol rioters was abruptly postponed Wednesday after new videos emerged of the man allegedly fighting with police, an unexpected twist in the case because prosecutors hadn't previously accused him of committing violence that day.

Robert Reeder of Maryland was charged in February with four misdemeanors. He pleaded guilty to unlawfully demonstrating inside the Capitol and was set to be sentenced on Wednesday afternoon, with prosecutors asking for two months in jail, partially due to his lack of remorse.

But on Wednesday morning, the online group known as the Sedition Hunters tweeted newly discovered clips and photos, apparently showing Reeder fighting with police on January 6. Sedition Hunters is one of several online collectives, many comprised of anti-Donald Trump activists, who have combed through footage from the Capitol attack to identify rioters. The Justice Department has cited their work in many cases.