Klayman: Jake Sullivan a Leftist Yale Educated Moronic National Security Adviser Who Feeds at the Trough of Hillary Clinton and Now a "Braindead President" Biden! God Help Us!
Order "It Takes a Revolution: Forget the Scandal Industry!" at BarnesandNoble.com 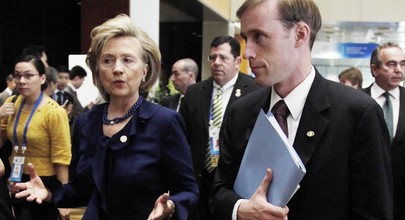 Every wedding should have a Hillary Clinton Bible reading
By Kate Bennett
POLITICO
August 18, 2021
You know you're tight with the boss when she attends your wedding, but it's a whole other level of closeness when she takes part in the ceremony. Such was the case this past weekend as Jake Sullivan, Hillary Clinton's steadfast foreign policy adviser, married Maggie Goodlander on Saturday at Yale University in New Haven, Connecticut.

The Democratic presidential front-runner was on the program at the couple's evening wedding, reading from the Letter of St. Paul to the Romans, as the duo tied the knot at Battell Chapel on the Yale campus, where Goodlander attended law school and Sullivan has been teaching. (Clinton's was a bigger role than that of U.N. Ambassador Samantha Power, who gave a toast at the couple's barbecue rehearsal dinner the evening before, which was also attended by Bill Clinton.) Hillary Clinton, for her part, squeezed the wedding into a busy week of East Coast fundraisers that included stops in Greenwich, Rhode Island, Boston and D.C.