Klayman: When CNN Aka "The Communist News Network" Praises Federal Judge Royce Lamberth You Know We Have a Serious Problem on the Federal Bench as Thomas Jefferson Predicted Would Come to Pass!
Order "It Takes a Revolution: Forget the Scandal Industry!" at BarnesandNoble.com 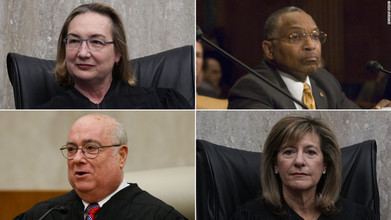 US Capitol riot judges step up as the conscience of democracy
By Tierney Sneed
CNN
August 13, 2021
(CNN)A "disgrace to our country." "The tyranny we rejected." "An embarrassment to every American."

In presiding over the cases of hundreds of people accused of breaching the US Capitol on January 6 in support of then-President Donald Trump, federal judges have not held back when describing the unprecedented nature of the events of that day.

"You called yourself and everyone else patriots, but that's not patriotism," Judge Amy Berman Jackson told defendant Karl Dresch earlier this month. "Patriotism is loyalty to country, loyalty to the Constitution -- not loyalty to a head of state. That is the tyranny we rejected on July Fourth."