'What Planet' Are They On? Judge Blasts Republicans for Downplaying Attack on U.S. Capitol
Order "It Takes a Revolution: Forget the Scandal Industry!" at BarnesandNoble.com 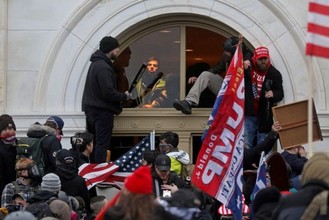 By Jan Wolfe
Reuters
August 12, 2021
Hundreds of supporters of then-President Donald Trump stormed the Capitol that day in a failed attempt to stop Congress from certifying Democrat Joe Biden's presidential election victory. The violence left five dead, including a Capitol Police officer, and more than 480 people have been arrested on charges linked to the attack.

"I'm especially troubled by the accounts of some members of Congress that Jan. 6 was just a day of tourists walking through the Capitol," U.S. District Judge Royce Lamberth said during a court hearing in Washington. "I don't know what planet these people are on."