Klayman: More Absolute Proof the Biden-Harris DOJ-FBI Under AG Garland and FBI Director Wray Is a Political and Corrupt Cesspool!
Order "It Takes a Revolution: Forget the Scandal Industry!" at BarnesandNoble.com 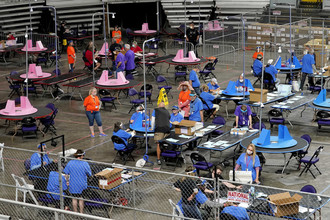 While the Biden administration "guidance" document carries no formal legal weight and may not strike fear into local officials, the Justice Department used the release of the legal analysis to press their campaign of saber-rattling against Republican-led audits of the 2020 vote in Arizona and other states, as well as voting changes many GOP-controlled states are pursuing as part of purported anti-fraud efforts.

"Jurisdictions have to be careful not to let those ballots be defaced or mutilated or lost or destroyed as part of an audit," said a Justice Department official who briefed reporters on condition of anonymity. "This document puts down a marker that says the Justice Department is concerned about this."