Huntington Beach Restaurant Tells Vaccinated Diners to Stay Away
Order "It Takes a Revolution: Forget the Scandal Industry!" at BarnesandNoble.com 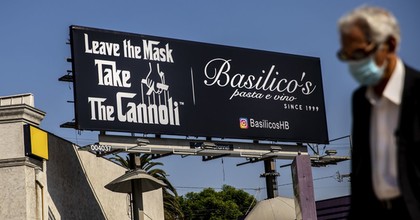 By Matthew Kang
Eater LA
July 29, 2021
A local restaurant reaches for worldwide infamy by having a "zero-tolerance policy against treasonous anti-American stupidity" and requiring diners to be unvaccinated to enter the restaurant, which is already a "mask-free" zone. Huntington Beach restaurant Basilico's Pasta e Vino has been trying to gain publicity with this stunt since last year, when it posted a billboard all the way up on La Cienega Boulevard, dozens of miles from its location with a sign that said "leave the mask, take the cannoli," a reference to the Godfather movie. The question is ... how does one prove they're unvaccinated?

Owner Tony Roman was quoted in the LA Times as saying his policy was to defend American liberty and freedom. He says this, of course, as cases and hospitalizations in Orange and Los Angeles County have risen sharply due to the delta variant and unvaccinated people. Roman's stance comes amid bars that have said they will not allow patrons to enter unless they have proof of vaccination.