Klayman: This Certainly Was Not the Case When I Sued Hillary Clinton!
Order "It Takes a Revolution: Forget the Scandal Industry!" at BarnesandNoble.com 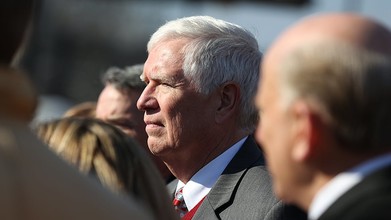 DOJ declines to back Mo Brooks's defense against Swalwell's riot lawsuit
By Harper Neidig
TheHill
July 28, 2021
The Department of Justice (DOJ) on Tuesday declined to back a Republican lawmaker's legal defense against a lawsuit accusing him of helping to foment the Jan. 6 Capitol riot.

DOJ lawyers said in a court filing that they were declining to certify Rep. Mo Brooks's (R-Ala.) claim that he was acting within the scope of his official duties as a member of Congress when he delivered a speech to Trump supporters at the Jan. 6 "Stop the Steal" rally.

"The record indicates that Brooks's appearance at the January 6 rally was campaign activity, and it is no part of the business of the United States to pick sides among candidates in federal elections," the filing reads.