Klayman: More Leftist Garbage From the CNN the Communist News Network!
Order "It Takes a Revolution: Forget the Scandal Industry!" at BarnesandNoble.com 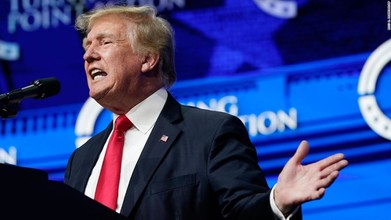 Analysis: 'Sore loser' Trump reaps fruits of election lies in Arizona
By Analysis by Stephen Collinson
CNN
July 25, 2021
(CNN)Ex-President Donald Trump's big lie came full circle on Saturday as he traveled to Arizona to dangerously seize on the false fruits of a sham election "audit" precipitated by his own discredited claims the 2020 election was stolen.

On a late afternoon of delusion and incitement, Trump offered a preview of how he could exploit grievances of millions of supporters who buy his lies about voter fraud to power a possible new presidential run in the future.

His speech underscored the nation's split reality over last November's election — the real one in which he lost and President Joe Biden was fairly elected and the nonsensical but powerful one that he sells to his supporters.