Klayman: DOJ and DC Federal Judge Moss Forces Trump Peaceful Protester to Confess That "Braindead Biden" Is "President!" Gets 8 Months in Prison to Boot!
Order "It Takes a Revolution: Forget the Scandal Industry!" at BarnesandNoble.com 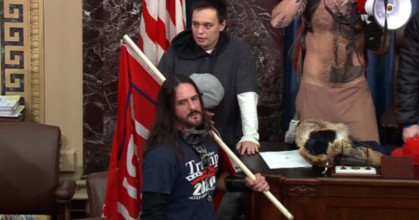 Paul Hodgkins, a 38-year-old crane operator, pleaded guilty last month to one count of obstruction of an official proceeding, and acknowledged that he took a selfie and joined a group of rioters who assembled at the front of the Senate chamber, with the intention to obstruct the certification of the 2020 Presidential election.

When announcing the sentence — which was less than the 15 to 21 month sentence recommended when Hodgkins pleaded guilty — Judge Randolph Moss called the Capitol attack "an assault on Democracy," but said Hodgkins' lack of criminal history and willingness to accept responsibility warranted a lower sentence. Hodgkins' eight-month prison sentence will be followed by two years of supervised release.