Klayman: Where Has Pence Been for the Last 6 Months! Loser!
Order "It Takes a Revolution: Forget the Scandal Industry!" at BarnesandNoble.com 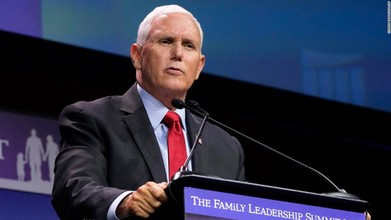 Pence says he's 'had enough' of Biden as he looks to escape Trump's shadow in Iowa
By Eric Bradner
CNN
July 17, 2021
Des Moines, Iowa (CNN)Former Vice President Mike Pence crisscrossed Iowa on Friday, assailing President Joe Biden's administration for unleashing "a tidal wave of left-wing policies that threaten to wipe out all the progress that we made" in speeches that could preview his potential 2024 message.

The trip to the first presidential nominating state offered a window into how Pence is attempting to craft a political future outside the shadow of former President Donald Trump.

Despite four years of loyalty, Pence has drawn the ire of the GOP's pro-Trump base over his refusal to heed Trump's wishes and attempt -- without any legal mechanism to do so -- to thwart the counting of some states' electoral votes on January 6.