Klayman: "ChiCom Elaine Chao" Is No Longer Attractive to Corporate Boards Since Her Equally "ChiCom Bribed" Husband Mitch McConnell Is No Longer Senate Majority Leader!
Order "It Takes a Revolution: Forget the Scandal Industry!" at BarnesandNoble.com 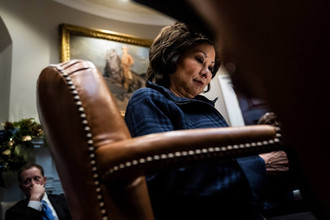 Corporate America isn't welcoming former Trump Cabinet officials with open arms, headhunters say
By Tory Newmyer
Washington Post
April 7, 2021
Before she joined the Trump administration as transportation secretary, Elaine Chao earned millions of dollars over the past decade by serving on the boards of big public companies such as Dole Foods, Protective Life and Wells Fargo, according to corporate filings.

She offered sterling credentials to businesses eager to keep current with the Republican leadership: A former banking executive, she became the first Asian American woman to serve in a Cabinet when President George W. Bush tapped her to serve as labor secretary. She has been a regular at conservative think tanks including the Heritage Foundation and the Hudson Institute. Her husband is Senate Minority Leader Mitch McConnell (R-Ky.).

But now Chao is encountering a fraught reentry into the private sector.