Klayman: Pelosi Probably Put These Capitol Police Up to Sue Trump!
Order "It Takes a Revolution: Forget the Scandal Industry!" at Amazon.com 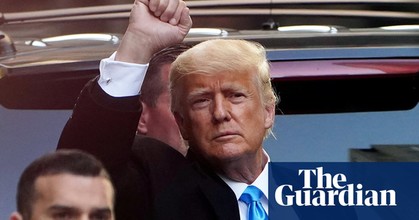 Police officers sue Donald Trump for injuries resulting from Capitol riot
By Guardian staff and agency
the Guardian
March 31, 2021
Two US Capitol Police officers have filed a lawsuit against Donald Trump, accusing him of inciting the deadly 6 January insurrection and saying he was responsible for physical and emotional injuries they suffered as a result.

James Blassingame, a 17-year veteran of the force, and Sidney Hemby, an 11-year veteran, filed the lawsuit on Tuesday in US district court for the District of Columbia seeking damages of at least $75,000 each.

"This is a complaint for damages by US Capitol Police officers for physical and emotional injuries caused by the defendant Donald Trump's wrongful conduct inciting a riot on January 6, 2021, by his followers trying to overturn the results of the 2020 presidential election," the lawsuit said.