Klayman: ChiComs Now in Bed With Ayatollahs and the Manchurian Candidate Bribed to the Hilt Joe Biden!
Go to www.FreedomWatchUSA.org and Support Our Citizens Grand Juries! Order "It Takes a Revolution!" at Amazon.com 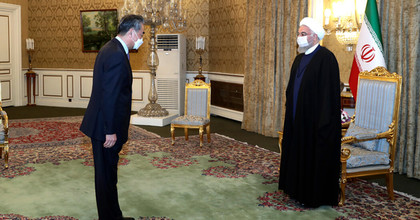 China, With $400 Billion Iran Deal, Could Deepen Influence in Mideast
By Farnaz Fassihi and Steven Lee Myers
New York Times
March 29, 2021
China agreed to invest $400 billion in Iran over 25 years in exchange for a steady supply of oil to fuel its growing economy under a sweeping economic and security agreement signed on Saturday.

The deal could deepen China's influence in the Middle East and undercut American efforts to keep Iran isolated. But it was not immediately clear how much of the agreement can be implemented while the U.S. dispute with Iran over its nuclear program remains unresolved.

President Biden has offered to resume negotiations with Iran over the 2015 nuclear accord that his predecessor, President Donald J. Trump, abrogated three years after it was signed. American officials say both countries can take synchonized steps to bring Iran into compliance with the terms of the agreement while the United States gradually lifts sanctions.