Klayman: Let's Make So This Evil Leftist Lying Witch Does Not Unpack!
Order "It Takes a Revolution: Forget the Scandal Industry!" at Amazon.com 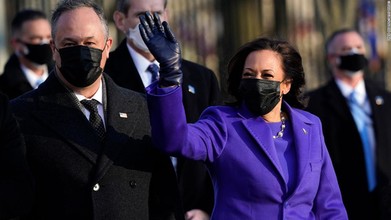 After two months in office, Kamala Harris is still living out of suitcases -- and she's getting frustrated with it
By Kate Bennett
CNN
March 27, 2021
(CNN)It has been more than two months since Kamala Harris was sworn in as vice president of the United States, a historic moment for the country, as Harris is the first woman and the first woman of color to hold the second highest office in the land. Yet, Harris -- along with her husband, Georgetown Law professor Douglas Emhoff -- is still, ostensibly, living out of suitcases, unable to move into the private residence reserved for the vice president because it's still undergoing renovations.

It's unclear why the renovations are taking so long, said one administration official, but it's a situation that has left Harris increasingly and understandably bothered, according to several people who spoke to CNN about her situation. "She is getting frustrated," said another administration official, noting with each passing day the desire to move in to her designated house -- a stately, turreted mansion two-and-a-half miles from the White House -- grows more intense.

The second couple continues to live in temporary housing at Blair House, the President's official guest quarters, just across Pennsylvania Avenue from the White House.