Klayman: Total Lies and Deceit by a Braindead Lackey of the Left!
Order "It Takes a Revolution: Forget the Scandal Industry!" at Amazon.com 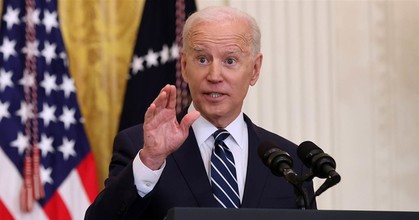 Biden began by setting a new goal of 200 million Covid-19 vaccinations in his first 100 days in office, said he plans to run for re-election and emphasized that his administration is expelling "the vast majority" of migrants who come across the southern border. He also acknowledged he probably won't hit a May deadline for pulling troops out of Afghanistan and hinted that he might "go beyond" calling for senators to engage in traditional "talking filibusters" when they are blocking his agenda.

In that way, the new president gave the public a clearer view of his positions on a wide variety of topics, digging into substantive policy details in a way that his predecessor usually did not. On immigration, in particular, Biden was well prepared for the questions that came his way. And he distanced himself from both hard-liners who accuse him of implementing policies that encourage migrants to come to the U.S. and progressives who want him to reverse more of President Donald Trump's regime quickly.