Marco Rubio: "There's Stuff Flying Over US Bases, and Nobody Knows What It Is" 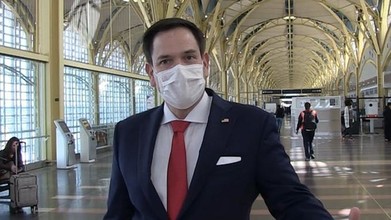 By Tyler Durden
ZeroHedge
March 25, 2021
Chatter about UFOs among current and former government officials appears to be ramping up ahead of the June 1 release of a UFO report by the Pentagon and spy agencies.

A TMZ reporter caught up with Sen. Marco Rubio (R-FL) at Reagan National Airport on Monday and questioned him about UFOs, according to Mediaite. Rubio, who is also a member of the Senate Committee on Intelligence, revealed he is concerned about UFOs buzzing over US military bases.

"There's stuff flying over military installations, and nobody knows what it is and it isn't ours," he said, adding that it's logical to want to identify these unidentified flying objects. "It's common sense, right?"

Rubio said objects are flying over military bases, "and we don't know what they are."