Klayman: Leftist and Other Media Avoid Publishing That Blacks Were Overwhelmingly Involved in Drugs, Guns, Violence and Mayhem on Miami Beach! Would Whites Have Been So "Protected" in Today's World? 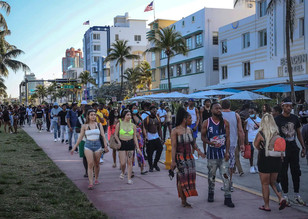 A 24-year-old woman visiting from Pennsylvania was drugged, raped and found dead in her hotel room, according to police. Two out-of-towners have been arrested. A man was shot and killed. Random gunfire has pierced the air. An Ocean Drive restaurant was trashed — inside and out — by fighting customers. Cars randomly stopped on the street, refusing to budge, as crowds partied.

Fights broke out. People stomped on cars. People got stampeded. A man, disguised as the Joker from "Batman," stood on a car and rained down dollar bills on throngs of people. Egging on a cheering, mask-free crowd, a woman rolled down her bikini bottom and twerked from the hood of a police car.