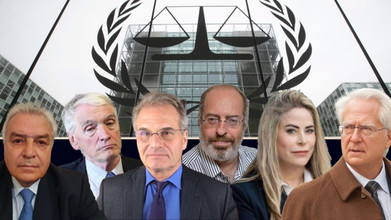 Des Avocats Et Des Experts S'Unissent Autour Du Code De Nuremberg Et Des Recours Pour Crimes Contre L'Humanité Devant Le Tribunal De La Haye
Guy Boulianne
March 24, 2021
For a few days now, I have been telling you about the appeals that have been filed before the International Criminal Court in The Hague and the Supreme Court of Israel, for violations of the Nuremberg Code and crimes against humanity, by the two lawyers Ruth Machnes Suchovolsky and Arie Suchowolsky from A. Suchovolsky & Co. This is really important. As I wrote in my previous article: "In my humble opinion, no 'local' court will defend us against the current health dictatorship, since the aim of 'local' governments - associated with world government - is precisely to destroy us all (individuals, families, businesses, etc.) and submit to slavery controlled by artificial intelligence. That is why I strongly support lawyers Ruth Machnes Suchovolsky and Arie Suchovolsky with whom I am in direct contact. "

On March 17, lawyer Ruth Machnes Suchovolsky announced on Facebook : "Lawyers around the world are turning to our offices and asking to join the complaint in The Hague. The same lawyers around the world recognize that Israel is a country where an experiment has been conducted and fear that their country will also be forced to be exposed to the experiment. The names of lawyers and acceding countries will be published later. "