2021 Is Shaping up to Be the Year of the UFO
Order "It Takes a Revolution: Forget the Scandal Industry!" at Amazon.com 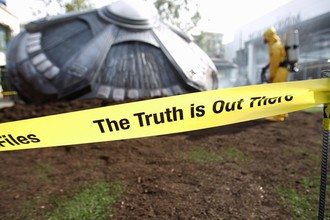 By Dani Di Placido
Forbes
March 23, 2021
In December 2020, President Trump signed a coronavirus relief bill that included an interesting stipulation - the bill set into motion an 180-day time frame in which US intelligence agencies must tell Congress everything they know about UFO sightings, via an unclassified report.

Remarkably, in what sounds like the opening crawl of an unimaginative sci-fi film, the report must also include an analysis as to whether or not UFOs pose a threat to national security (perhaps, one day, our puny, primitive weapons will be used to "bring democracy" to a space-faring civilization).

As the deadline inches closer, public interest in UFOs has started to spike, recently encouraged by a Fox News interview with Trump's former intelligence director John Ratcliffe, who stated: