Klayman: I'm Sure Biden-Harris & the Left Will Blame the Drugs, Alcohol, Shootings, Muggings, Attacks, Gun Violence and Deaths On "White Supremacists!" Not!
Order "It Takes a Revolution: Forget the Scandal Industry!" at Amazon.com 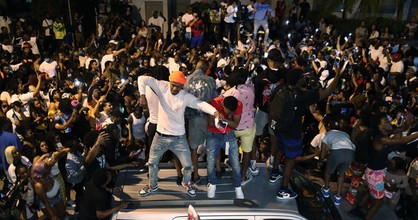 It's Police Versus Partiers in Miami Beach
By Benjamin Hart
Intelligencer
March 22, 2021
The thousands of people who have descended on Miami Beach for the annual carnival of heavy drinking, partying, and lust that is spring break are not generally that concerned with adhering to proper COVID-19 protocol — nor, thus far, a curfew imposed by the city.

Police have made more than 1,000 arrests over the past few days, as they square off with often-unruly crowds, who have gathered, largely maskless, in the streets and at bars and restaurants, with drunken melees a common feature of the landscape.