Klayman: This Phony Dispute Was Orchestrated With the ChiComs to Give Biden Cover Now That He Was Caught Accepting Bribes Thru Hunter!
Order "It Takes a Revolution: Forget the Scandal Industry!" at Amazon.com 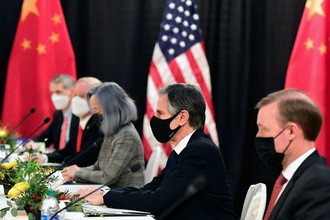 "I had low expectations for Alaska and those expectations have been met," said attorney Clete Willems, who served as a trade advisor to President Trump.

At stake is one of the most valuable relationships in the world. China was the United States' third-largest goods trading partner in 2019 with $558.1 billion in total trade.

"The Biden Administration has signaled that trade at all cost is not their position," added Dewardric McNeal, an Obama-era policy analyst at the Defense Department.