Klayman: "Braindead Biden" Has Put the Entire Nation on Its Knees as Well!
Order "It Takes a Revolution: Forget the Scandal Industry!" at Amazon.com 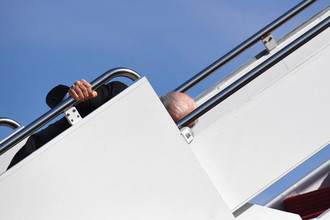 Biden Falls While Walking Up Steps To Get On Air Force One
The Daily Wire
March 19, 2021
President Joe Biden fell while walking up the stairs to board Air Force One on Friday as he was preparing to go to Atlanta to visit with community leaders after this week's tragedy in the city.

Videos posted online showed Biden, 78, repeatedly stumbling while trying to walk up the stairs as he grasped the rail the entire time. Eventually Biden was able to get up the stairs and he turned around and gave a salute.

Biden's fall comes after he referred to Vice President Kamala Harris as "President Harris" this week during a speech and did not correct himself. Russian President Vladimir Putin responded to an attack from Biden this week by saying, "I would say to him: I wish you good health."