Klayman: Duke's Student Body Should Be Devastated Over Coach K's Having Harmed Their Academic Integrity With Non-Student B-Ball Ringers With One & Done Recruits! 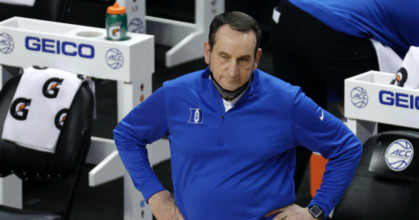 Sports author and Washington Post columnist John Feinstein said Friday morning on 106.7 The Fan the Sports Junkies that the veteran coach didn't want the season to end like this.

"I texted with Krzyzewski yesterday and (he was) devastated," Feinstein said. "He thought they could beat Florida State. They were finally playing pretty well. They beat a good Louisville team very handily on Wednesday night. There's a story in the student newspaper at Duke that there are over 100 kids who are rushing fraternities that tested positive. I thought Duke kids were supposed to be smart, wrong."