Klayman: If Trump Aligns With the Worthless And "Dead" Republican Party He Too Will Be Politically Dead!
Order "It Takes a Revolution: Forget the Scandal Industry!" at Amazon.com 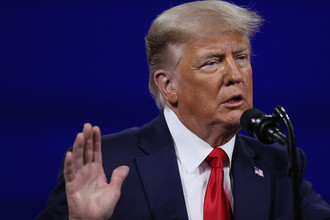 Trump dives into battle for Senate
By Burgess Everett
POLITICO
March 12, 2021
Donald Trump sounds like he's ready for a GOP civil war. But he's also eager to play a leading role in Senate Republicans' battle for the majority.

The former president is dialing up GOP senators to back their campaigns and talk strategy, weighing how to approach primaries in critical open seats and making sure he leaves an imprint on the midterm elections. Trump's involvement, revealed in interviews with a dozen GOP senators, shows how far the 50-member conference has come two months after they weighed a clean break with the former president following the insurrection at the Capitol by his supporters.