Klayman: The Sleazy and Now Dead Republican Party at Work! Losers Now Ripping Even Trump Off!
Order "It Takes a Revolution: Forget the Scandal Industry!" at Amazon.com 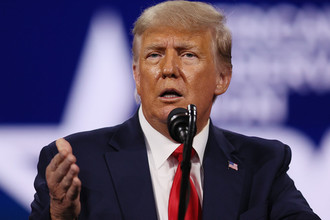 RNC brushes back Trump team on 'cease-and-desist' demand
By Alex Isenstadt
POLITICO
March 8, 2021
The Republican National Committee is denying a cease-and-desist demand from Donald Trump's attorneys, who asked the party organization to stop using the former president's name and likeness in fundraising appeals.

In a letter sent Monday afternoon to Trump attorney Alex Cannon, RNC chief counsel Justin Riemer asserted that the committee "has every right to refer to public figures as it engages in core, First Amendment-protected political speech, and it will continue to do so in pursuit of these common goals."