Klayman: Take It From a Duke Alum, Students! How Can You Root for a B-Ball Team That Has No Business Being at Duke As "One & Done Ringers?" They Do Not Represent Duke, Only Their Own NBA Aspirations! 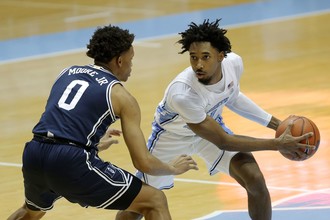 Looking Back, Looking Ahead
By JD King
Duke Basketball Report
March 8, 2021
CHAPEL HILL, NORTH CAROLINA - MARCH 06: Leaky Black #1 of the North Carolina Tar Heels is guarded by Wendell Moore Jr. #0 of the Duke Blue Devils during the first half of their game at Dean E. Smith Center on March 06, 2021 in Chapel Hill, North Carolina.

Saturday wasn't much fun for anyone so we kind of took a breather Sunday. It's possible a great run in the ACC Tournament could get Duke in the NCAA Tournament but it's not a great feeling that it's come to that. Nonetheless, you can't rule it out and we'll be watching and pulling the rest of the way and we hope you will be too.

We were down after the UNC game but on Sunday we started to think about the future and we weren't down for long.