Klayman: Lindsey Graham Is the One Who Lives in A "Dark Closet"! Two Faced and Worthless Like the Rest of the Republican Party!
Order "It Takes a Revolution: Forget the Scandal Industry!" at Amazon.com 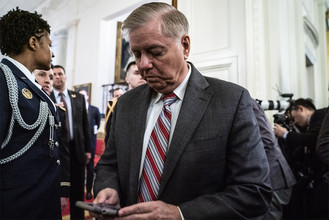 Analysis | Lindsey Graham points to GOP's reality under Trump: It's a hostage situation
Washington Post
March 8, 2021
Sen. Lindsey O. Graham's relationship with former president Donald Trump has contained multitudes. He was arguably Trump's biggest critic on the 2016 debate stage, saying that nominating Trump would deservedly destroy the party, but he later became one of Trump's biggest Senate allies. All the while, he seemed to want to make clear that this was a marriage of convenience rather than true conviction — the price to pay for getting things done.

On Sunday, though, Graham (R-S.C.) described the relationship between Trump and the GOP in starker terms: as something akin to a hostage situation.