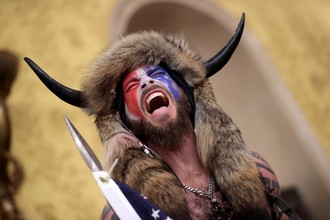 By Josh Gerstein, Kyle Cheney
POLITICO
March 6, 2021
The lawyer for the horned shaman who became one of the most iconic figures involved in the storming of the Capitol in January is in hot water with a federal judge after facilitating an interview that the judge said violated federal rules.

At a hearing Friday on the case against QAnon follower Jacob Chansley, U.S. District Judge Royce Lamberth dressed down Chansley's attorney Al Watkins for using his privileges as a lawyer to arrange an interview with Chansley for CBS' "60 Minutes+."

"Can you tell me how that came about?" Lamberth asked Watkins. "It seems to me that you visited as a subterfuge."