Klayman: Biden-Harris "Gestapo" Marches On!
Order "It Takes a Revolution: Forget the Scandal Industry!" at Amazon.com 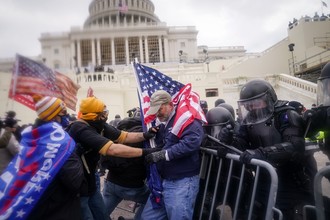 Trump appointee arrested in connection with Capitol riot
By Josh Gerstein
POLITICO
March 5, 2021
The FBI on Thursday arrested Federico Klein, a former State Department aide, on charges related to the storming of the Capitol on Jan. 6, marking the first known instance of an appointee of President Donald Trump facing criminal prosecution in connection with the attempt to block Congress from certifying President Joe Biden's victory.

Klein, 42, was taken into custody in Virginia, said Samantha Shero, a spokesperson for the FBI's Washington Field Office.

An FBI lookout bulletin issued two weeks after the Capitol assault included a photo of Klein, prompting two tipsters to contact the FBI and finger him as the man in that picture, according to an affidavit filed in federal court in Washington.