Must Be Nice: Trump Ally Matt Schlapp and His Firm Got $750k for Failing at His Job
Order "It Takes a Revolution: Forget the Scandal Industry!" at Amazon.com 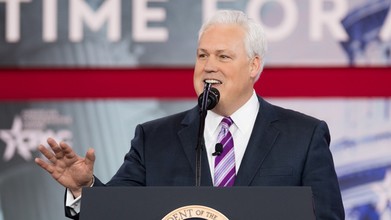 By Caleb Ecarma
Vanity Fair
February 28, 2021
In the final weeks of Donald Trump's presidency, many of the swamp leeches who'd spent four years attached to him focused on leveraging their parasitic bond to power for as much cash as possible before January 20. One such hanger-on was Matt Schlapp, the chairman of the American Conservative Union and husband to former top Trump communications aide Mercedes Schlapp. Matt Schlapp has built his influence in part by directing ACU's annual Conservative Political Action Conference—essentially the Panama City Beach spring break for College Republicans trying to get laid, Comic-Con for people who LARP as military operators, and Coachella for Fox News fans dying to see their favorite TV acts live. It's through CPAC that Schlapp has gotten plenty of face time with Trump. The former president spoke at the conference every year of his term, including in 2019, when he used Schlapp's main stage in National Harbour, Maryland, to make one of his longest speeches on record.