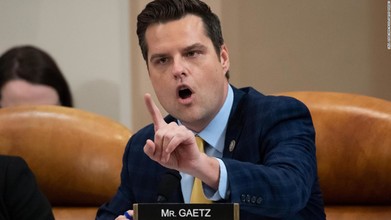 More than a dozen Republicans tell House they can't attend votes due to 'public health emergency.' They're slated to be at CPAC.
By Dana Bash, Manu Raju, Daniella Diaz, Lauren Fox and Michael Warren
CNN
February 27, 2021
(CNN)More than a dozen of former President Donald Trump's closest Republican allies in the House skipped Friday's votes and enlisted their colleagues to vote on their behalf, signing letters saying they can't attend "due to the ongoing public health emergency."

But those members are actually in Orlando and listed as speakers at the Conservative Political Action Conference, an annual meeting aimed at energizing conservative activists and boosting their own profiles.

The members include Florida Rep. Matt Gaetz, who addressed the conference on Friday, as well as others who were listed as scheduled speakers -- such as Reps. Paul Gosar of Arizona, Jim Banks of Indiana, Madison Cawthorn of North Carolina, Ted Budd of North Carolina, Mark Green of Tennessee, Darrell Issa of California, Ronny Jackson of Texas, Mike Kelly of Pennsylvania, Rep. Lauren Boebert of Colorado, Ralph Norman of South Carolina, Devin Nunes of California and Greg Steube of Florida.