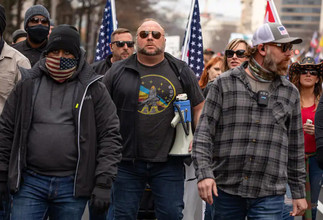 By Spencer S. Hsu and Devlin Barrett
Washington Post
February 20, 2021
The Justice Department and FBI are investigating whether high-profile right-wing figures — including Roger Stone and Alex Jones — may have played a role in the Jan. 6 Capitol breach as part of a broader look into the mind-set of those who committed violence and their apparent paths to radicalization, according to people familiar with the investigation.

The investigation into potential ties between key figures in the riot and those who promoted former president Donald Trump's false assertions that the election was stolen from him does not mean those who may have influenced rioters will face criminal charges, particularly given U.S. case law surrounding incitement and free speech, the people said. Officials at this stage said they are principally seeking to understand what the rioters were thinking — and who may have influenced beliefs — which could be critical to showing their intentions at trial.