Klayman: Burr Needs More Than a Censure: He Is a Crook Over His Dumping Stock at the Outset of COVID-19! Citizens Grand Jury Awaits!
Order "It Takes a Revolution: Forget the Scandal Industry!" at Amazon.com 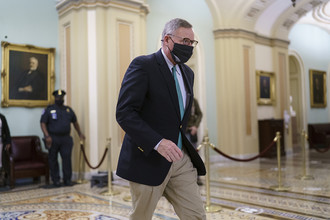 GOP Sen. Burr facing North Carolina censure after Trump conviction vote
By Myah Ward
POLITICO
February 15, 2021
The North Carolina Republican Party is set to vote Monday on whether to censure Sen. Richard Burr for his vote to convict Donald Trump after the former president's impeachment trial, adding to the growing list of Republican members of Congress facing consequences for moves against Trump.

Burr, who has already announced he will not seek reelection in 2022, is among seven Republicans who voted to convict Trump on Saturday, and the state GOP swiftly condemned him for the move. North Carolina's GOP Chair Michael Whatley said his vote "in a trial that he declared unconstitutional is shocking and disappointing."