Klayman: Reminder and Warning Why We the People Declared Independence From Great Britain Mr. Biden!
Order "It Takes a Revolution: Forget the Scandal Industry!" at Amazon.com 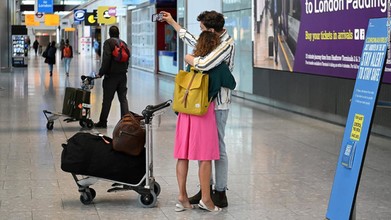 UK warns all vacations could be canceled for 2021
By Tamara Hardingham-Gill
CNN
February 11, 2021
(CNN) — Booking any kind of summer travel escape became an even bigger gamble for millions of British people on Wednesday as the the government warned that even staycations could be under threat until vaccinations are completed.

After officials previously signaled that a foreign trip may not be possible during 2021, UK transport minister, Grant Shapps, says that even a break on home soil may now be out of the question.

The news came after the nation's health minister, Matt Hancock, announced that arrivals to the UK who lie about visiting a destination on its Covid "red list" may face up to 10 years in prison or a £10,000 ($13,800) fine.